Here is where you can find news and announcements as well as photos.  Check back often to be sure you don’t miss important announcements.

What a year 202o turned out to be. But we were still able to hold our Club Championship.  Our new champion is Jo Rasmussen, presented the club trophy by LWGA President, Winnie Hamilton, and runner up, Tracey Morgan. 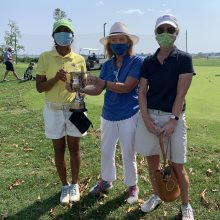 Here are the winners

Mimi Levit, an original member of the LWGA, passed away on January 6 at the age of 97. Click here to learn more about the life of this long time Westport resident.

Our club championship was played over four days at the end of a very rainy July.   Our new club champion is none other than our Tournament Chair, Liza Paglialunga.  Congratulations to all the winners.  Not pictured, the second flight runner-up, Bernadette Jackel; and third flight winner, Karen Jones, and runner-up, Wendy Montanaro.

We congratulate Barbara Cronin, the winner of the LWGA George Buck tournament. Barbara is a new member to our association and is off to a great start to the season.

The Longshore Women’s Golf Association has donated dozens of daffodil bulbs to the course this fall. These will be planted over the next several weeks so they can be enjoyed by all next spring.

This is in addition to many plantings behind the pro-shop provided by the LWGA this past spring. The gardens near the putting green were edged, replanted and mulched with help from our Superintendent, Todd Salamone.  Most of the plants were donated by members and the Westport Garden Club.

On August 9, we held our second annual Lobster Fest at Longshore.  It was a beautiful evening and everyone enjoyed the food and the company.

We held our Club Championship, a 36 hold stroke play tournament, July 25 and 26.  Congratulations to our winners!

On July 18, we hosted our Member Guest Tournament at Longshore.  The weather was good and we had a field of 96 golfers.  Here are the winners as well as some photos of the days events:

Congratulations to the winners for our President’s Cup tournament. This was a two day, 36 hole, stroke play event for two person teams.

Women from our league participated in the match play George Buck Tournament over the last few weeks. Congratulations to our winner, Alison Tane (photo below) and runner-up, Kim Smith.

Jon Janik comes to Longshore Golf Course with over 15 years experience in the golf industry. As a graduate of St. Joseph High School, he first played Longshore as a member of the golf team competing in matches, as well as the 1997 Chappa Invitational.

Born and raised locally in Bridgeport, Jon grew up playing at Fairchild Wheeler Golf Course where he won the 1997 Junior Club Championship and the 2002 Men’s Club Championship. He began working in the golf industry while still in college. In 2000, he was offered a position at the Ivan Lendl Golf and Tennis Camp, where he would spend three summers. After graduating from Fairfield University, Jon turned professional and became the Assistant Golf Professional at Tashua Knolls Golf Course in Trumbull.

In November 2007, he graduated from the Professional Golf Management Program and was elected to PGA Membership. The next year he was promoted to Head Golf Professional. In addition to his responsibilities at Tashua Knolls, Jon has also been the head coach for the Trumbull High School Boy’s Golf Team. In 2011, Jon won the distinguished Connecticut Section PGA Junior Golf Leader Award. From 2011-2013, he was recognized as a U.S. Kids Golf Top 50 Kids Teacher. In 2014, he earned the honor of becoming a U.S. Kids Golf Top 50 Master Kids Teacher. In 2014, he was recognized as the FCIAC Boys Golf Coach of the Year.

As a child growing up in Queens, Todd was raised on the game of golf and played all through high school on the B.N. Cardozo varsity golf team. He attended The Ohio State University where he majored in Turf Science. After receiving his B.S., Todd worked at several private country clubs in Long Island and volunteered at multiple professional golf events including the U.S. Amateur, U.S. Open, The Northern Trust Open, and The Barclays tournament. Each event provided him with opportunities to learn from the best superintendents in the country.

“We have the utmost confidence that Todd’s experience, leadership skills, and focus on quality course conditions will continue our path of improving Longshore for the residents of Westport,” stated Vince Gilmartin, Northeast GM of Golf Operations for BrightView Golf Maintenance.